We bring the Highlands to You

Everyone has a family history. It is just that not everyone is lucky enough to be fully aware of the history of the families to which they belong and from whom they descend.

Genealogy is the study of family history and in particular the study of specific families, normally those to whom we belong. In the twenty-first century, the study of genealogy has broadened due to a) the spread of the internet and b) the discovery and continued development of knowledge around DNA.

Traditional genealogy involves recording oral traditions, carried down through generations within families and then moving on to hopefully "back it up" with evidence obtained from traditional sources such as registers of birth or baptism, adoption, marriage and death; census returns; tax records; military records; court and tribunal records; emigration and shipping records; trade and industrial records and wills, confirmation/probate and burial records.

Most formal records did not come into existance until the early 19th century and for a great many people, the trail goes cold around the period 1750-1790, making it almost impossible to trace back any further into earlier periods of history. It is a fact that generally only the very wealthy and those who broke the law tend to have been recorded in earlier times, before the introduction of compulsory registration. For many people with ancestors who lived in British Colonial America, their best hope lies in finding court records showing that their pioneer ancestors were transported as criminal before 1775 or in the military muster rolls showing that their pioneer ancestors served in the French-Indian Wars which saw so many British regiments being sent across the Atlantic ocean.

We are happy to discuss with you your own genealogical "shopping list" and we undertake commissions to carry out research for clients where we have access to potential primary sources.

Below are examples of primary sources available to most students of genealogy. 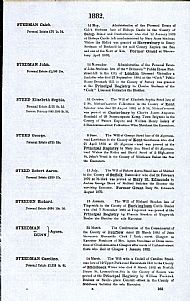 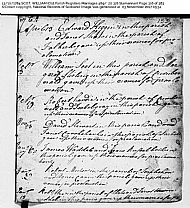 Stirling Family Bible
This is a photograph of the Stirling Family Bible. Many families kept a family bible and they are often excellent sources of contemporaneously recorded information not showing in any register
site map | cookie policy | privacy policy | accessibility statement