We bring the Highlands to You

Here is a sample of a day-long tour. We will be happy to discuss your requirements and plan one or more tours around them.

Leave Inverness, taking A9 to Kildary then north. Explain about the development and importance of the Cromarty Firth and then about the Storehouse of Foulis, Tarbat House and Balnagown Castle.

Leave Dornoch and head north, talking about Sutherland family and Dunrobin. While passing through Brora, Loth and Helmsdale, talk about industrial heritage, the last wolf shot and crofting respectively. Into Caithness explain about the differences between the two counties and then at Latheron, about the Forse Sutherlands and the various branches of the Sinclair family. Carry on to Wick.

Arrive in Wick for lunch; leave allowing a few minutes for wandering around etc. Return south to Latheron via the A9 and stop at the Clan Gunn Centre. Allow half hour for visit to centre and walk around graveyard. Explain the importance of the Highland Clearances to the history and development of the area.

Leave for Helmsdale and stop for visit to Timespan, afternoon tea and leave, returning to Inverness via the A9. 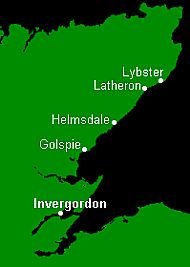